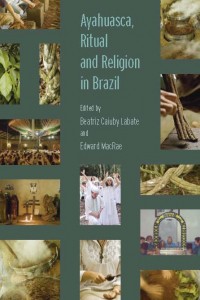 Ayahuasca, Ritual and Religion in Brazil examines the emergence of religious groups in the Brazilian Amazon who constitute their systems of ritual, myth and principles around the use of a psychoactive brew known by diverse names, one of which is the Quechua term ‘ayahuasca’. Although the study of these religious movements has seen much development in recent decades there are still few publications in English, especially in the area of anthropology. This collection, containing many articles previously published only in Portuguese, explains the research conducted in Brazil. It shows a representative sample of the main types of approaches that have been used and also offers an overview of the historical development of this field of research in Brazil, especially from the perspective of the human sciences.
This volume makes explicit what the study of the ayahuasca religions can contribute to classical and contemporary issues in anthropology. It presents a varied set of ethnographic approaches employed in the initial mapping of this phenomenon, establishing its historical and cultural origins. It also provides a basis to develop future work on these religions, both in their original contexts and in their expansion throughout Brazil and the world.

The introduction intends to make more explicit the conceptual unity to the book. It contains a summary of the articles, justifying the choices made and absence of other issues – such as the expansion of the Brazilian ayahuasca religions abroad, due to the virtual absence of investigations concerning this. The text situates the Brazilian ayahuasca religions in relation to Amazonian shamanism and other forms of popular religiosity in Brazil. There is also a discussion of the relation of these groups to other international religious movements and other drug cultures. There is a brief historical synopsis of the process of legalization of ayahuasca in Brazil (including contemporary developments) and an indication of the legal status of these cults in other countries. Analysis is also provided of the relationship between these groups and the prohibitionist global tendency. For example, the defense of the ritual and religious use of a “sacrament” sometimes -paradoxically- reaffirms prohibitionist principles. On the other hand, the informal controls exercised by users and other individuals or institutions that interact directly with the subjects are perceived to be more efficacious than simple legislation. The text concludes with the aspiration that the book will provide an excellent ethnographic contribution and will stimulate further developments in this field of study that is barely twenty years old.

1. Mariana C. Pantoja Franco and Osmildo da Silva Conceição – The use of ayahuasca among rubber tappers of the Alto Juruá

The article is the fruit of coauthorship between an anthropologist with long research experience in the area of the Extractivist Reserve of the Alto Juruá, in the far west of the state of Acre in the Brazilian Amazon, and a rubber tapper who was first introduced to ayahuasca in the context of a rubber camp. His initiation has elements of non-indigenous and indigenous culture and results in a quite original synthesis, which is narrated in the first-person in the conclusion of the article. The article traces the history of the introduction of ayahuasca, or cipó (vine), among the rubber tappers of the Alto Juruá in their relations with indigenous populations and their pajés (shamans), highlighting those rubber tappers who distinguished themselves as apprentices and became healers renowned among their contemporaries. Beginning in the 1980s the use of cipó occurs in the context of the struggle of rubber tappers against the rubber bosses, and ayahuasca mysticism merges with political conflict. New syntheses take place, now with the introduction of elements of the religious doctrine of Santo Daime.

This article deals with the Santo Daime rituals developed by Mestre Irineu, and adopts an approach based on Marcel Mauss´s concept of body techniques which are seen to produce the symbolic life of the spirit through physical, psychological, and sociological assemblages. Based on the underlying patterns of shamanism, Mestre Irineu built his own system, taking into account the existing socio-cultural context, enabling it to exert control over the reality perceived under altered states of consciousness, thus directing the control of emotions and unconsciousness. The article also deals with certain elements of the sacred system such as the table/altar, the uniforms, the rattles and the hymns. The author also studies the details of the   rituals for healing, manufacturing ayahuasca, dancing, concentrations and funeral services. Other uses of the brew are also discussed such as in the treatment of burns, wounds and other ailments, and as an adjunct to childbirth. There is also a discussion of the use of ayahuasca as an amulet.

3. Luiz Eduardo Soares – Santo Daime in the Context of the New Religious Consciousness

In this essay Soares places CEFLURIS, the principal branch of Santo Daime outside the northern region of Brazil, in the context of two important wider themes: the hopes and desires of the 1960s counterculture, and the construction of a truly vital national identity for contemporary Brazil. After a brief summary of the origins of Santo Daime, Soares discusses the subjective experience and moral imperatives of that religious tradition. Later, he conjures a vision of the reworking of the “archaeology” of the Brazilian imaginary through the symbolic contact with the Amazon brought about by literal and imaginary peregrinations to Mapiá, the “Mecca” of Santo Daime. This may be, he concludes, part of the creation of a national identity that symbolically links the Amazonian region, long considered a disconnected hinterland, with the rest of the country. At the same time, Soares raises several questions posed by the phenomenon of Santo Daime with regards to the Brazilian project of modernity, and which are relevant to many issues beyond those usually considered “religious.”

4. Wladimyr Sena Araújo – The “Barquinha”: symbolic space of a cosmology in the making

The purpose of the article is to introduce the symbolic repertoire of the Centro Espírita e Culto de Oração – “Casa de Jesus, Fonte de Luz,” popularly known as the Barquinha. The Barquinha was created in 1945 in Rio Branco (Acre) by Daniel Pereira de Mattos, native of Maranhão. The ritual ceremonies, which include the consumption of Daime, imply a relation of European, Afro-Brazilian, and indigenous religious practices and philosophies. The concept of cosmology in construction is used to understand the constant and dynamic process of creation and re-signification of religious symbols of this group unto itself.

5. Sandra Goulart – Religious matrices of the União do Vegetal

This article analyzes the relations between the União do Vegetal (UDV) and other religious traditions. Narratives provided by early members and biographical details of the founder of the UDV since his childhood, reveal the presence of elements within the cosmology and rituals of this religion that are originated in various sources. These span from popular Catholicism, Allan Kardec’s spiritism, masonry, Jewish tradition, and Afro-Brazilian religions, to popular Amazonian beliefs. The text shows how the combination of aspects of these different traditions is important in the constitution of the new religious system of the União do Vegetal. The article situates this ayahuasca religion within the field of Brazilian religiosity, indicating, for instance, parallels in its formative process with the history of other religions, such as Umbanda. The article also highlights relationships between elements of the mythology, doctrine and rituals of the União do Vegetal and the Amazonian context linked to the use of ayahuasca.

The article focuses on the healing service offered by Barquinha churches. The Barquinha religion is an Amazonian form of Christianity, with syncretic elements. The article surveys three recurrent methodological and theoretical approaches found in anthropological works on healing in the Barquinha religion, to which the author contributes with his own ethnographic research and analysis.  Often, analytical emphasis is located on the participant’s subjective and symbolic processes, in association with the ayahuasca experience. Ayahuasca—called Santo Daime by adherents—is the central sacrament of the religion, frequently implied in accounts of healing. Another common focus is on ritual settings and changing bodily dispositions. Thirdly, anthropologists have considered aspects of the social relations involved in the therapeutic process. This paper considers the social interactions during healing encounters. Such encounters typically involve healer-spirits incorporated in Barquinha spirit-mediums. The article suggests that the healing service may echo symbolic motifs associated to the historical experience of migration and rapidly changing living circumstances shared by many participants.

7. Sérgio Brissac – In the light of Hoasca: an approach to the religious experience of participants of the União do Vegetal

This article deals with the symbolic experiences of urban participants of the União do Vegetal (UDV), in the state of São Paulo, Brazil. Through the analysis of participant speech, it seeks to identify the discursive axes of disciples of the UDV. Subjects’ experiences under the effects of the tea are strongly liminal, and frequently act as mediators through which the subject articulates elements of his life with those of the UDV worldview, experiencing them as a single reality. This experience is labeled by the author as encompassment in the force of the burracheira (the UDV designation for the “strange force” that accompanies ingestion of the tea). As elaborated by Brissac, this idea denotes both the subjective experience of being ‘swept up’ by the effects of ayahuasca, and the way in which the UDV as a symbolic system draws to itself elements of other religious practices.

This article, written by the president of several commissions that were set up by the Brazilian government to study the religious use of ayahuasca, is a compilation of the various official reports that provide a basis for the present legal status of the ayahuasca religions in Brazil. The author discusses the importance of the ritual aspect of the different usages in the Santo Daime and União do Vegetal religions and goes into details of some of the ceremonies, especially those performed during the preparation of the brew. He also examines some of the accusations made by parents concerned about behaviour changes in their children after they joined one of those religions, coming to the conclusion that such worries are commonly found among relatives of people who are converted to any religion. The article also includes some brief considerations on the chemistry of ayahuasca and ends by denying that the type of perception the followers of these religions seek could be considered to be hallucination, suggesting that it is best understood as a search for an expansion of individual and communal potentials, self knowledge and an experience of the sacred.

9. Edward MacRae – The development of Brazilian public policies on the religious use of Ayahuasca

This chapter draws comparisons between the attempts at ‘scientific control’ of Afro-Brazilian religion in the early twentieth century with current political processes in respect of the ayahuasca religions of Brazil. A number of similarities between both processes are highlighted, including the role played by doctors and anthropologists sympathetic to trance religions of possession (in the case of Afro-Brazilian religion) and shamanic flight (in the case of ayahuasca religion). The chapter concludes by arguing that whilst ayahuasca religion has traditionally been understood through the dominant discourse of biomedicine the broader socio-cultural critique articulated by anthropological approaches is steadily gaining ground.

This text presents a series of reflections on the therapeutic potential of the ritual use of ayahuasca in the treatment and handling of substance dependence problems. Anthropological and psychiatric data on the ritual use of ayahuasca for “healing” dependence in psychotherapeutic centers (in Peru and Brazil), as well as in ayahuasca religions (in Brazil), are reviewed and critiqued. Methodological, ethical and political considerations for current and future research in this area are then discussed, and an interdisciplinary agenda for studies on the use of ayahuasca to treat or handle substance dependence is proposed.