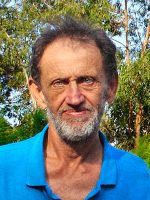 is an American and naturalized Colombian. He has been living in Colombia for the last 25 years, where he is married and has a son. In 1963, he got his Bachelor of Arts from Columbia University (New York) and in 1966, a Master of Arts degree from Cambridge University (England). He is a translator, journalist and member of the Asociación de Prensa Extranjera of Colombia. He has translated more than fifty books. He is also a leading investigator of the indigenous use of yajé (ayahuasca). He has written an important study of Colombian yajé practices: Yajé: The New Purgatory, Encounters with Ayahuasca, (Villegas Editores, 2005), winner of the 2005 Latino Book Award in the category of health. The book is an independent English-language version of his Yajé: El Nuevo Purgatorio (Villegas Editores, 2004). Weiskopf has also written about yajé in publications in Americas, Earthwatch and Shaman’s Drum, his most recent being an interview in Number 67, 2004, of the latter. He has also studied the uses of ayahuasca in Peru. For the past fifteen years he has been a follower of some of the country’s most eminent “taitas” or healers, among them Taita Pacho Piaguaje, Taita Antonio Jacanamijoy, Taita Diomedes Días, Taita Isaías Mavisoy, Taita Oscar Román and Taita Eustorgio Payoguaje.